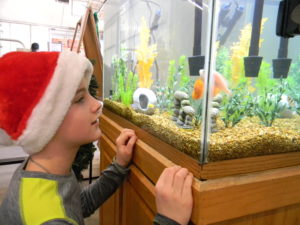 It has been over three week since we place the fish into the tank and it is unbelievable the reactions we are seeing with the customers in the store. “It’s great.” “It make the place much nicer.” Even the customer who announced that he was going to get a tiger fish for the tank! I talked him out of it by telling him that the tank did not belong to the store, but was placed here for one of our younger customers. It is fun to watch the children come in and stop in their tracks when they spot the fish tank. Then they slowly approach it all the while making fish faces and moving their lips to mimic the fish. Jack and Karen are stopping by on Saturdays to check on the fish and to do some coaching on how we need to take care of the tank. What a joy!! And so this is what Urban Missionaries do!