Skip to content
The very best part of working in this ministry is the surprises we get from people who we don’t know. They come to us with some truly wonderful ideas to help others. Such was the case back in January when I received a telephone call from John William Bonia, a student at WPI and a member of the  AXQ fraternity. The fraternity brothers decided to make up origami roses and sell them to the WPI student body on Valentines day and donate the proceeds to an organization that works with the poor in the City of Worcester. Isn’t that a wonderful idea? When I received the call from John asking for information about our ministry I gave him a quick overview and offered to give him a tour of our facilities and show him our works of charity in action. He quickly agreed and we set  up a date and time. When he arrived he patiently listened to me as I went through each program and explained its history and what we are doing now. At the end of the tour I asked if he had any questions? He said no, and then proceeded to explain what the fraternity was going to do for their Valentine’s Day fundraiser and that we would be receiving the funds raised.   So I eagerly waited for Valentines Day to come because I truly thought that they would raise very little and was hoping they would not feel as though they somehow failed. But I was wrong. A few days after Valentine’s Day I heard from John. They raised $117.85 selling their origami roses. I was amazed. The students at WPI rose to the occasion! We would like to extend our heartfelt thanks to the fraternity brothers at AXQ Fraternity and to the students who supported their fundraising efforts. It’s the little things that touch the heart and this act of charity touched my heart in such a way that I spent many a day during lent thinking about it.  Thanks guys!! 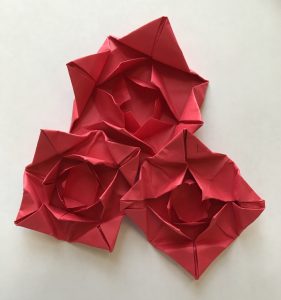