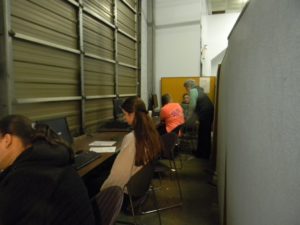 Most of you know about our annual Christmas Giving program and what happens when we open up the the doors. For those of you who haven’t heard the story, let me fill you in. In years gone by, Ken Ricardi and I would get to 242 Canterbury at 4:00 A.M. We would sit, have a cup of coffee, and speculate how many others would be waiting when we lifted the overhead door. Some years there would be two, or three, or five mothers standing outside our front door waiting for us to open. This year was a little different, in that  Karla Reuter was with me instead of Ken, and instead of four or five we had six mothers waiting for us; Within two minutes, two more came through the door. This phenomenon startles me every time it happens. I have spent many hours pondering why this happens. It is not like we are not available any time after 5:00 A.M. We are open from 5:00 A.M. to 4:00 P.M. from the first Saturday in October until the first Saturday in December, and then we are open for signups from the first Sunday in December until December 23 from 6:00 P.M. to 8:00 P.M. That’s a lot of hours, 159 hours to be somewhat exact. It’s not as though they are destitute, although some could be. For the most part they look healthy, drive OK cars, are able to stop off at Dunkies, and have the cash for the signup fee of $4.00 per child.  They are probably not without financial worries, but they get by. Could it be that they want to be first? The community that we serve knows about having to wait in lines for hours to get services from welfare or the doctors at the emergency room. They have experiences of  waiting in line only to be told, by the time they get to the front of the line, that everything is gone. They also know that the very best stuff gets handed out first, and if you snooze you lose. In fact, this is the complaint of LittleStore customers from day one.  I would guess it is a combination of any of the above, but whatever it is it still causes me to wonder!