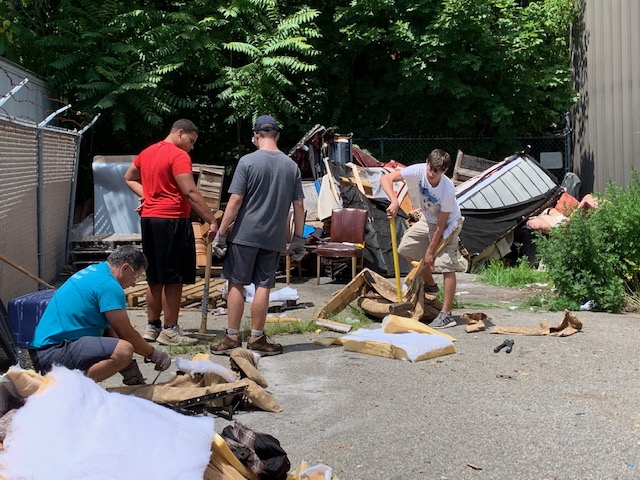 A few months ago, Beth Tobin, one of our sustainers, stopped by to drop off a clothing donation and we got to talking about the Young Neighbors in Action program. Beth is responsible for bringing the Y.N.I.A program to the LittleStore. As we talked about how successful the program is, I asked, “Beth how long ago did we start with Y.N.I.A, 15 or so years ago?” She replied, “Oh no, it is more like 22 or 23 years ago we started to work with you.” I was stunned. I knew it was a long time ago, but not that long. Time does fly when you are having fun.

This year, we had two groups come to the LittleStore ready and willing to work. The first week was from July 15th through the 19th. There were two parishes in the group. One from the Catholic Community of the Epiphany, Satre, Pennsylvania and the other group was from Our Lady Help of Christians from Wapwallopen, Pennsylvania. The leaders of the group were David Scheftic and Molly Mendofik respectively. As you can see from the picture attached to this article, they were out in the hot sun hacking and whacking brush and smashing, bashing, and slashing old furniture donations and miscellaneous stuff dropped off in our parking lot during the night time hours. They also redeemed returnable bottles and cans, and when it rained they moved into the shed to do some sorting of incoming donations.

The second week we had a bit of a surprise. I had asked the Y.N.I.A. leaders what size group we would be getting so Jeff Hall, our Retail Program Manager, and I could figure out what kinds of jobs we could have them do. For the first week, they were spot on, but for the second week, they told us that we would be getting a group of 3 girls and a boy plus an adult leader. When they arrived, I walked out to the front of the store to greet them, and to my surprise there was a group of six young ladies and three adult leaders. They were from Saint Elizabeth Parish, Bedford, NH. As I was leading them through the warehouse to the office for an introductory talk, my mind was racing. “What are we going to have them do?” kept racing through my mind. By the time the introductory talk was done, I had it figured out! I would have them cut back the brush along the fence. That is what they did every day except one when it rained. The leaders, Sarah McCarthy, Valerie Boles, and Rebecca Gallo did an amazing job of keeping this group of constant noise (mostly singing or laughing) focused and on the task at hand. You can see the enthusiasm in the attached picture.

Needless to say, I was exhausted at the end of the two weeks, but thoroughly enjoyed being included in their group. As each group was leaving, I told them that if they didn’t come all the work they did would still be waiting for someone to do it. As always they left their imprint upon our hearts.